Specific agencies respond to different pollution events so be sure to contact the appropriate agency. Please click here for a list of hotline numbers throughout the Delaware Watershed that were compiled by DRN. When contacting the appropriate hotline, tell them all you can about the exact location and nature of the pollution. If you have the ability to safely walk upstream to find the source of pollution, this is ideal. Request a case number when you call, let them know you have alerted Delaware Riverkeeper Network, and request a call back from the assigned agency representative. If you have photos of the pollution, request an email address for these photos to be sent.

Approximately 3 am, Friday December 21, 2007, the Dredge MacFarland, while docked at Ft Mifflin, discharged between 291 and 500 gallons of diesel fuel oil. The oil was captured in a basin off of the Delaware River and held there. The Dredge MacFarland is owned and operated by the Army Corps of Engineers and is used to conduct dredging operations on the Delaware River.

The spill occurred during an internal transfer of fuel and was said to result from equipment failure. As of DRN investigations this morning the area has been boomed off and no oil is being found outside of the booms or in the River.

The Coast Guard and other emergency responders, including Philadelphia Fire HazMat, are on site.

The Delaware Riverkeeper Network received a hotline pollution report in October 2007 concerning a PennDOT stockpile site (Stockpile #6) Route 6, Shohola Township, Pike County, PA. The 9.65 acre site was leased by PennDOT for many years -3 to 4 decades- from the PA State Game Commission, who owns thousands of adjacent acres. The site was used to stockpile materials and equipment for use on the roadways. A report was received by a journalist that drums were buried there containing pollutants, which he reported to authorities and in his newspaper column. The report led to an agreement by PennDOT to “clean up” the site, which had been shut down with expiration of the lease. PADEP, the Pike County Conservation District, the PA Game Commission, and others were brought in to review the situation after PennDOT apparently began earthmoving at the site without approved plans or a permit. Since the area to be disturbed was less than 5 acres (about .1 acres under) PADEP did not require a NPDES permit. It was decided by the agencies that the only approval needed was for an erosion and sediment control plan from the Pike County Conservation District.

The Pike County Conservation District (PCCD) oversaw the implementation of the plan they approved and quickly problems surfaced at the site. It became apparent that wetlands had been filled illegally in the past; the fill has to be removed and PCCD will direct mitigation of the wetlands that were destroyed (some fill was already removed but a large area of wetlands is still buried in fill). Soil samples were few and far between, unknown materials were being stacked up, pollutants were escaping on to the ground, which flows to the Shohola Creek, classified as a High Quality stream. DRN representatives visited the site on 10.29.07 and photographed piles of excavated drums, strong smelling contaminated soil, stockpiled waste, stained soil surfaces, and the ongoing excavations.

Delaware Riverkeeper Network filed an environmental complaint with the U.S. Environmental Protection Agency on 10.24.07. In response, EPA representatives inspected the site on 11.01.07 and are now monitoring events at the site. DRN does not have confidence in PennDOT’s present work plan or the ongoing operations, especially considering the possibility that significant pollution has resulted from the illegal dumping and burying of waste on this PennDOT site for so many years. DRN is advocating for EPA oversight of all activities at the site, a reconsideration of how clean up is to proceed, more comprehensive soil and surface water sampling, groundwater sampling, and accurate characterization of what is being found at the site.

The Shohola area where the PennDOT stockpile is located is a rural forested region with lakes, high quality streams, and lots of outdoor activities, about 14 miles from the Wild and Scenic Delaware River. The desecration of these public Game Lands by PennDOT is shameful. It is shocking to think that this natural amenity may end up being labeled a superfund site, ruined by the hands of a taxpayer-supported government agency. Until that time, the clean up begs for EPA, who can bring professional and experienced expertise to this environmental disaster. 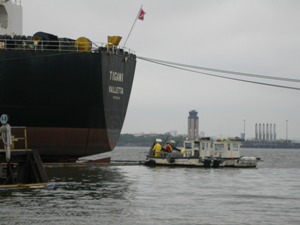 The Tigani is an 809-foot, Malta-flagged tanker operated by Cardiff Marine Inc. The tanker was moored at the Citgo Asphalt facility in Paulsboro, New Jersey. This is the same site as the 2004 Athos I oil spill that leaked 265,000 gallons into the Delaware River.

Protective booms were quickly deployed at the mouth of the Mantua and Woodbury Creeks to protect these sensitive areas. The coast guard was on site by noon time and clean up efforts began immediately. Skimmers cleaned up 2,300 gallons of the discharged oil. Cleanup crews collected oil-soaked debris.

NJDEP is conducting a natural resource damages assessment. Clean up efforts were characterized by officials as successful. Two oil soaked birds were witnessed by the Delaware Riverkeeper during a review of the spill site.